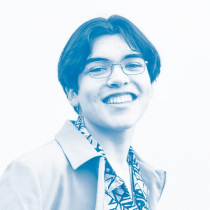 I’d describe Hagley as a place that gives people the room to discover their own reason for learning, and then supports them in that direction.

Te Whare ki Te Puna Wai o Papa has been such an important space for me. It’s a pocket of our school that operates under tikanga Māori- it’s open to everyone and has a real community feel. The kaiako/teachers of the Māori department see students as whole people, not only as pupils, and I’ve flourished there. My potential has been nurtured, and I’ve had opportunities to grow as a leader, and a person. Recently, I had the chance to co-teach a reo Māori session for students training to be teachers- something I would never have imagined myself doing a couple of years ago.

I’m interested in art, music, and language- they’re are all expressions of our identity- and here at Hagley I’ve been able to pursue each of these. I take Music, Printmaking, Māori, Kapa Haka, Film, and Classics. The variety of subjects is why I chose to come to Hagley for my last two years of high school. I came from a smaller school where there was a lot of freedom but being smaller there were fewer classes on offer. There’s also been the flexibility to take six subjects- the usual is five- and there was space in my timetable to do that.

The two councils I belong to at Hagley (Student Council and Te Urungi) have given me an appreciation of how important it is that young people have a voice and are listened to. We care about our world, the people in it, and doing what we can to make positive change- that feels meaningful here.

I think of Hagley as being like the launching pad that I’ll set out from into the future. I feel confident now, in heading into the world.